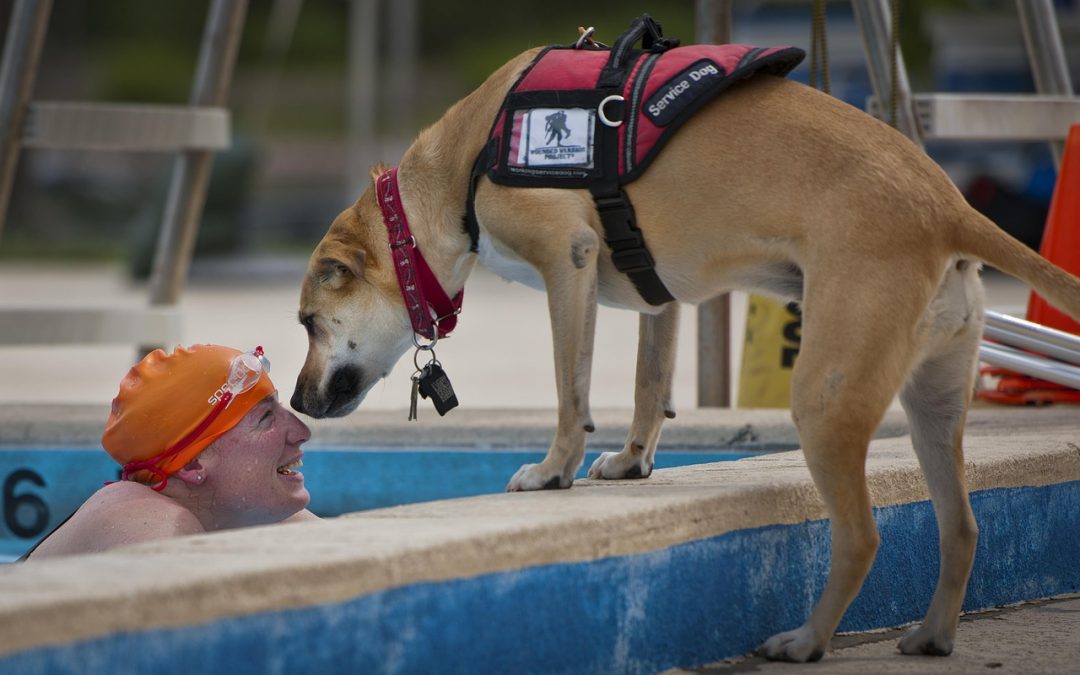 WASHINGTON (Army News Service, June 27, 2008) – One of the most popular therapists at Walter Reed Army Medical Center prefers to show his enthusiasm and appreciation by wagging his tail and giving slobbery kisses.

Deuce is a three-year-old chocolate Labrador retriever and the first therapy dog assigned to a U.S. military hospital. Walter Reed is the only military hospital to use therapy dogs, according to Deuce’s owner, Harvey Naranjo, who is in charge of adaptive sports and community reintegration programs at the hospital.

“We had just started a program where we take our servicemembers to ride horses as part of their therapy to work on their core…While we were there, they had some dogs running around in the barn,” Naranjo said. “And I just saw how our guys, how our patients, opened up to the dogs and all of a sudden you saw these tough guys just totally melt.

“I thought, ‘Wow, what a wonderful thing if we can get one of these dogs for the clinic.’ And I said it out loud. There happened to be a retired Army veterinary officer there who overheard me and he started asking me all these questions and before I knew it I was getting a dog.”

After breaking through a lot of red tape, Deuce, who was originally trained as a service dog, arrived at Walter Reed about two years ago. He goes on walks with patients who are missing legs, both to encourage them to get out and get accustomed to walking dogs they might already have. He plays fetch with patients who are missing arms so they can learn how to use their prosthetics and throw the ball. He lets patients lean on him for balance during therapy exercises. He even runs in marathons with the wounded Soldiers.

“That has been a huge encouragement for our guys,” Naranjo said. “You know, going out and running five miles for the first time and the dog is running with them, their buddy is out there supporting them and also running, really boosts their morale and gets them out. He’s part of the team.”

But most importantly, Deuce’s job is to bring smiles to patients’ faces and help them forget where they are. He was clearly the center of attention in Walter Reed’s occupational therapy gym Tuesday as wounded Soldiers and staff members stopped to rub his ears and sneak him treats.

The program has been so successful that Walter Reed added another dog, and a third will start in the Fall. The dogs alternate days, and Naranjo said Deuce loves working so much he gets upset when he has to stay home.

“He loves it here. The days he’s not coming to work, I hear it at home. If I’m leaving in the morning, he’s going ‘Am I not going” kind of look. He really loves interacting with the patients and really being involved with everything we do…When I’m going to work, if I grab the vest, he’s already standing at attention at the door, waiting. ‘Are you going to take me” The minute I don’t have the vest, he’s still laying on his bed waiting to see what’s happening next… If I were to take the vest off Deuce at this moment, he’s a dog. He’s doing whatever he wants to do. I have to call him two, three times, but the minute the vest is on, he’s in work mode. He knows what to do.”

Other patients in the hospital are visited once or twice a month by dogs and volunteers from People, Animals, Love (www.peopleanimalslove.org), an organization that trains therapy dogs. The dogs, who are in good health and bathed just before their visit, visit in-patients and the pediatric ward.

The therapy dogs were such a success at Walter Reed, according to Naranjo, that program has referred about 20 servicemembers for personal service dogs.

“These dogs have been a huge benefit to them,” he said. “Aside from the physical tasks the dog does for them, one of the extra things that we never thought about was, the dogs have now drawn attention away from the patients’ injuries and what’s going on. A lot times when our guys go out in public and they’re on their own or with their Families, they feel a little vulnerable because everybody’s kind of focused on them and their injuries. Hey, look at that guy’s leg. But now what’s happening, is they walk with this dog and the attention is drawn to the dog and people come and talk about the dog first before they focus on the physical injuries a patient is presented with.”

After losing both legs to a land mine in Afghanistan, Cpl. Sue Downes received Lyla, a 2-year-old yellow Lab, through the Canines for Combat Veterans program. The program is run by National Education for Assistance Dogs Services, and Lyla was actually trained by an inmate in the prison pups program. A $25,000 donation to the Tower of Hope organization covered Lyla’s training, food and other needs. Another donor awarded Lyla free veterinary care for life so Downes isn’t responsible for any costs associated with the dog.

Downes has been at Walter Reed for a year and a half and she said Lyla — who wears a service-dog vest Downes made out of her own uniform — has made a huge difference in her life. Lyla lets Downes lean on her for balance or for help standing up. The dog turns off the light at night and brings the spray bottle of water Downes needs to fit into her prosthetics.

In fact, when Downes took the spray bottle out of her purse and set it down, Lyla immediately picked it back up and gave it to her. Even after Downes assured her it was okay, Lyla continued to watch the bottle for several minutes before disappearing under Downes’ seat until she was needed again.

“Before, I wouldn’t enter the hospital by myself unless I had somebody with me,” Downes said. “Now that I have her, I come in by myself a lot of the time. Just more confidence knowing someone’s there. She’s there to help me if I fall, things like that.

“The stress and anxiety, (Lyla) some how just reduces it,” she added. “You feel calm. Because whenever I start having a panic attack or something, I don’t know, she senses things. She’ll come to me and I’ll pet her and be like ‘good girl’ and I’ll forget about it. It’s soothing.”

Although Lyla knows she has a job and belongs to Downes, Downes added that Lyla is also a regular dog and a great pet for her 7-year-old son and 9-year-old daughter. She does tricks and loves to play tug-of-war.

Two other dogs have deployed to Iraq with combat-stress units to help Soldiers relax and give them a little piece of home.

“You have areas where occupational therapists in theater have to go and assess combat-stress situations where there may have been a death in the unit,” said Naranjo. “Soldiers have been on constant deployments in areas where they haven’t had access to their families, with a phone call or whatever.

“What an awesome thing to come back after pulling duty and have a nice dog waiting for you, wagging its tail or whatever. It has opened up the door for communications because a lot of times they don’t want to talk to a therapist or say what’s wrong with them. The dog helps them calm down, relax and then open up a little bit more. The dogs have been very effective that we had a request for two more dogs to do the same type of work in Afghanistan.”