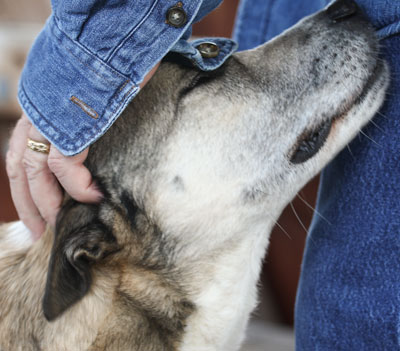 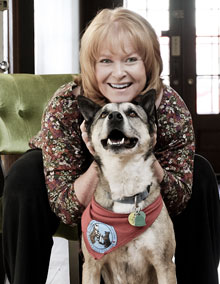 Bethlehem, NH– Harley was looking for a home and a new job when Angela Jones adopted her.

Jones, of Bethlehem, took in the 11-year old Huskey-mix in November 2010, after her previous owner was no longer able to keep her.

Harley’s job is to make people feel comfortable– fostering a sense of calm and well-being and reducing the effect of afflictions like anxiety and high blood pressure.  Today, Harley continues her free visits as an official therapy dog, though now Jones is her handler.

“The biggest benefit of a therapy dog is they help people relax so they can be open to talking about things it might not be easy to talk about,” said Jones, who runs a clinic in Littleton on Cottage Street specializing in providing trauma-sensitive holistic care for mental health and substance abuse disorders for adults and children.

After a few months of study and putting Harley through a test, Jones became registered with the Lakes Region chapter of Therapy Dogs International.  They showed up to the exam into a gym full of other dogs.

“We were on a basketball court and there was an obstacle course with items you would find in a hospital,” she said.

Jones draws a distinction between therapy dogs and service dogs.  “Service dogs are trained to assist their owners with daily routines and therapy pets are not,” she said.  “Obedience is the minimal training required for a therapy dog. “Temperment is primarily what qualifies them for this title.”

Harley accompanies Jones to her clinic on Cottage Street, where the dog sits in with 10-12 clients a week.  Once a month, Harley volunteers at the Friendship House in Bethlehem.

Jones considers herself lucky to have Harley.

“Harley continues to amaze me at home and at work,” she said.  “Clients comment they look forward to receiving her gentle greetings and notice her absence.  She’s very effective at disarming awkward first meetings.”

Although it wasn’t the reason they requested services, Jones said Harley successfully helped one adult client restore her trust of dogs after a traumatic dog bite incident as a child.

“Harley always volunteers her time and always seems to know when to approach and when not,” Jones said.

In researching therapy dogs, Jones said she found a 1962 paper by child psychologist Boris Levinson that dubbed the dogs “co-therapists.”

“Levinson discovered he could make significant progress with a disturbed child when Levinson’s dog, Jingles, attended therapy sessions,” she said.  “He went on to find that many children who were withdrawn and uncommunicative would interact positively with the dog.”

It’s that the human-animal bond that helps humans in a myriad of ways, she said.

“In 1980, a team of scientists at the University of Pennsylvania found that human contact reduced the physiological characteristics of stress.  Specifically, lowered levels of blood pressure, heart rate, respiratory rate, anxiety and tension were all found to correlate positively with human-pet bonding.  Today there are over 30 organizations developing research on this topic.”

Since childhood, Jones has had a variety of pets from turtles and birds to cats and dogs.

“I grew up with dogs and love dogs,” she said.

Anyone wanting to meet Harley, or anyone knowing of someone who might benefit from Harley’s free threapy services, can call Jones at 603-616-2019.